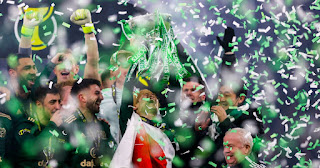 The first trophy of the Ange Postecoglou era was delivered on Sunday afternoon for Celtic. A top class Kyogo Furuhashi double sealed an invaluable victory for the Hoops in the final against Hibs. I gave you my player ratings from the match at the weekend and today, I’ll be reflecting on what was a huge day for Celtic Football Club and Ange Postecoglou.

When Ange Postecoglou was appointed manager of Celtic, there were several doubts over the Australian’s credentials. His play was described as ‘Kamikaze’ like, his experience questioned, his character disputed however the fifty six year old has plainly silenced his critics.

The achievement of winning a major trophy within the first six months of a new manager‘s reign cannot be underestimated. In addition, six of the eleven players who started for Celtic in the final signed for the club in the summer. This shows the scale of the rebuild Celtic had at their hands in the summer and how successful the bedding in of the new recruits has been.

It is an unquestionable fact that the winning of a cup at this stage of the season will provide Celtic with a substantial confidence boost going into the rest of the season and in particular the four crucial league games prior to the winter break. Momentum is a palatial part of football and that is exactly what is building within the Celtic squad at the minute.

As well as momentum, the camaraderie and spirit within the Celtic team at the minute is considerable. This has been proved with the grit shown to get the last minute winner away to Ross County last Wednesday and the nature of the elated celebrations on Sunday.

Kyogo Furuhashi’s return undoubtedly provided Celtic with some encouragement going into kick off on Sunday. The importance of his presence up front cannot be underestimated. The Japanese has incredibly averaged a goal or assist every one hundred and two minutes in his time at Celtic so far and the energy and vitality he brings will be key for Celtic going forward.

After tasting success in the Premier Sports Cup, Celtic are still competing in three more competitions. Out of the league, Scottish Cup and Europa Conference League, the former is clearly the most important with the money at stake however it would be great to have runs in the two latter. In the cup, Celtic have Alloa to play in the fourth round and in the Europa Conference League, the Hoops will take on Norwegian side Bodo/Glimt in the knockout play off round. Winning the Premier Sports Cup will bestow great belief among the Celtic team that they can go on to achieve even more prosperity in the future.

I think we can all agree in the six months Ange Postecoglou has been in charge of Celtic, he’s completely transformed the club. Play style, players and mentality is completely contrasting of that of the 20/21 season. Here’s hoping the Aussie can go on to deliver further silverware and success in Glasgow.

Popular posts from this blog 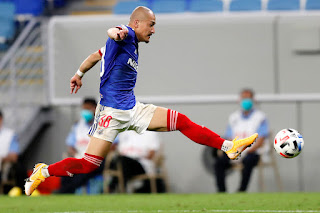 This time last year, if you read an article that spoke about Celtic potentially signing a player or two from the J. League, you’d be wandering what kind of bizarre logic the author is basing his opinions on. However, since the appointment of Ange Postecoglou as Celtic manager, there has been a plethora of speculation about incomings, particularly that of players from Japanese football. The reason being is the Celtic boss’ former team is J. League side Yokohama F. Marinos. The Australian believes there is inordinate value in Asia and Postecoglou has already disposed his knowledge of the market with the signing of Kyogo Furuhashi who has been nothing short of a revelation since joining Celtic.   The January transfer window is just around the corner and today, I’ll be looking at five players who could look to replicate the striker’s success at the club by signing from the J. League in the upcoming transfer window. Let’s begin.  Reo Hatate  Since I begun looking at possible players Celtic
Read more 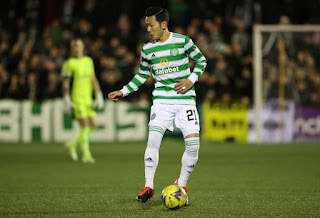 Yosuke Ideguchi joined Celtic on New Year’s Eve of 2021 as part of a trio of Japanese signings. He was seen as somewhat of a ‘project’ signing and cost the Hoops approximately £700,000 according to Transfermarkt.   Before coming to Celtic, Ideguchi (or ‘Guchi’, as he prefers to be called) already had previous experience in Europe in stints at Leeds United, Spanish side Leonesa and German outfit Greuther Furth. However, all of these spells were ravaged by injury as he managed only 13 appearances for all clubs put together.  As a result of his initial lack of success in Europe, the Japanese midfielder returned to Gamba Osaka in his homeland where he initially made his breakthrough between 2014 and 2018.  Guchi was able to solidly rebuild his reputation at Gamba, making 86 appearances in his second spell at the club as he helped them to 7th, 2nd and 13th places finishes in the J. League in the 2019, 2020 and 2021 seasons respectively.  The holding midfielder was able to disclose his tenac
Read more 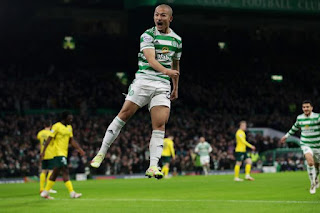 Upon the return of fans to Scottish football, Celtic secured a vital win in the Premiership title race. New signings Daizen Maeda and Reo Hatate were on song as the Hoops won 2-0 against Hibs. Here’s my player ratings from the match. Joe Hart - 8/10 The Englishman was ample when called upon and controlled a rather awkward pass beautifully with his chest. It was yet another clean sheet for Hart and Celtic to maintain their record as the best defence in the league.   Josip Juranovic - 8/10 Juranovic got forward well down the right hand side and heeded the call to step up and double Celtic’s lead through a penalty. We’re finally getting to see what the Croatian can conjure up at right back and it certainly looks promising.  Cameron Carter-Vickers - 8/10 Yet another 8/10 is Cameron Carter-Vickers. Himself and Carl Starfelt were utterly solid in the Hoops’ backline. Carter-Vickers won duels, was comfortable on the ball and stepped up when required. The case for Celtic to purchase the defend
Read more

Hi, welcome to Footblog. My name is Josh McCafferty, I’m 16 years old and have been interested in football from a very young age. I love writing about the beautiful game and in particular my favourite team, Celtic. Most of my content is about the The Hoops however I also write about many other topics surrounding football.